A digital sculptor and 3D animator, Swedish artist David Aberg spent almost a decade honing his craft: staying up-to-date on the constantly evolving technology and learning the outlines of the human body to be able to digitally render corporal parts with anatomical precision. “I am a sculptor who creates sculptures that don’t exist in real life. Technology allows me to create these artworks in exceptional detail, to make them look entirely believable in virtual media.”

David loves digital space. “It is interactive. I can navigate in this space. It is a parallel world created by humans; an electronic version of reality. You can put on a VR [virtual reality] headset and walk into it.” As the technology develops, it also raises some philosophical questions. Because of his intimate interaction with it, David contemplates, “What is our reality? I think we are living in a simulation. Absolutely! I think we have this technology to mirror ourselves, to be more conscious about who and what we are.”

David appropriates imagery from sci-fi and fantasy genres, brings up references to art history and his contemporaries, and makes allusions to advertising, beauty industry, and fashion photography. He is trying to create an otherworldly image, something that is more beautiful than the reality. In part, his classically rendered sculptures bring back the perfect forms of antiquity. Mixing them with contemporary culture gives the ancient myths a modern upgrade. “Mine is just another version of Greek or other mythologies. It’s just different aesthetics: different clothing, different kind of creatures, more in the contemporary context.”

Watch an excerpt from Zombierina, 3D animation with sound (3.01 min)

In addition to being an attempt to personify mythology of our time, David’s work became reflection of himself, a self-portrait that follows his personal narrative. During 5 years at the art school and for some time afterwards, he spent years in solitude of his studio working on his art, obsessed with the medium and the images that, through careful research, contributed to his aesthetics. “Zombierina, Ultra Fusion, and Chrysalis are all projects where the characters are closed off from the external world, frozen and in a mental state of repression. But there is no sadness, it’s in these rich inner mental realities they find strength and power to transform themselves into something beautiful and different, or maybe even a truer version of themselves.” This theme of metamorphosis is prominent within David’s work.

Watch an excerpt from Chrysalis, 3D animation with sound (2.48 min)

In Chrysalis video, for example, the woman with a cat’s hand has emerged from within a cracked pupal case. Chrysalis (or pupa) is a life stage for a butterfly, where it transforms from a larva into an adult. Likewise, the woman is becoming her spirit animal, which stands guard on her shoulders. In David’s latest work “Brittle Black Moon Rising” the transformation cycle is complete and the body breaks open into a full blossom to let out the Brittle Black Moon, which embodies a sensitive personality and all its emotions. It was expanding and rising within, while all we could observe was the stillness. And then the moment of explosive transformation, in all its delirious intensity, looks like the creation of the Universe. 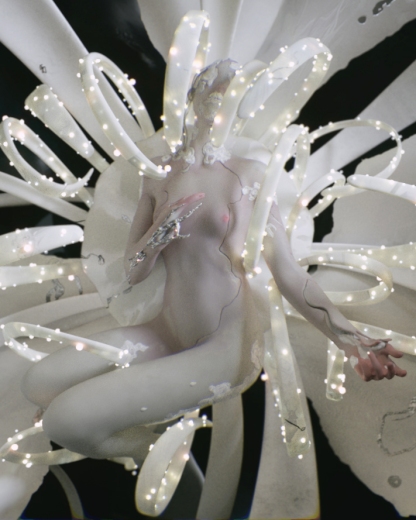 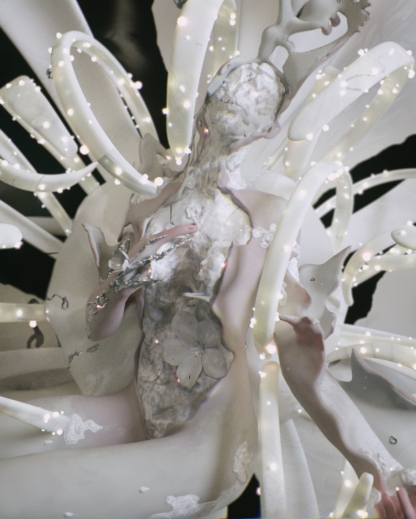 Having been always interested in beautiful things, nature, and organic shapes, David wants to resuscitate the beauty in art. “When I went through art school, post-modernism dominated, and it was forbidden to even say something like beauty or style or to talk about aesthetics. I felt guilty because, contrary to the requirements, I wanted to make beautiful pictures.” After graduation, he felt free to reclaim his power. Even the camera moves around the sculpted figures in a contemplative choreography following the Golden Ratio spiral to emphasize his desire for the ideal.

When David started his art training in 2004 at The Royal Institute of Art in Stockholm, the technology he needed wasn’t yet there. “Graphics software, having a video-game-type resolution, produced images that looked like cheap computer games. And I wanted to do photo-realism. I felt very lonely in my yearning to do computer graphics on this level. I had to trust myself, having no predecessors, sculpting everything from scratch anatomically correct, photo-real, all textural; everything myself except the sound.”

Brittle Black Moon Rising, a 4min-41sec video shot with a single camera move, took him a year to complete. The artist sculpted everything from slabs of digital clay in ZBrush; did all the animation, texturing, lighting, and material setup; and lastly, added color grading and other camera effects in the post-production stage working in Adobe After Effects. The music, custom original score, was a collaboration with his friend, artist Ayno Goze, musician and sound-designer.

Until recently, David has not made a physical object, wanting to raise a question about realities. When you look at the prints of his sculptures, you may think they were photographs of the actual objects, but they aren’t. In Ultra Fusion, the room, where the sculpture stands, looks like a space in a gallery. “Everything is made like if it was a physical reality where I am sculpting, painting. But it becomes a photograph; it becomes an animation. Just recently, I started to explore 3D printing, which I am going to continue exploring more. Maybe doing 3D printing in plastic and then transferring it to marble or stone. And integrate it, having photographs, animations and objects, going back and forth between the spaces: the virtual space and the real.”

To learn more and connect with the artist:
www.davidaberg.se
www.instagram.com/david_aaberg

Passionate about people with passions, I write about artists, their lives and artistic journeys; sometimes, I post my musings on exhibitions that speak to me. I don't believe in critiquing, but I believe in connecting. Knowing someone better hopefully leads to understanding, which also gives rise to a connection (intellectual, emotional or spiritual). People, who establish such a link with an artist, are more likely to want to live with their art. And, not only, often buying an artwork is a gesture of support for the artists we like and encouragement to keep creating. To quote Swiss curator, artist and art historian Harald Szeemann, "If the personal relationship is taken out, the dimension of intimacy, then the museum and art business gradually starts to become annoying." View all posts by YABNYC