More then two thousand years ago, Plato compared society to life-time prisoners in a cave, where the reality they see and deem to be the only truth is a mere reflection of the world outside. According to Plato, people should not be taking sensory knowledge of reality (which comes from what we see and hear in the world) for reality itself and only philosophers are able to see beyond our perception and comprehend alternative possibilities. Artists, however, have that capability as well. 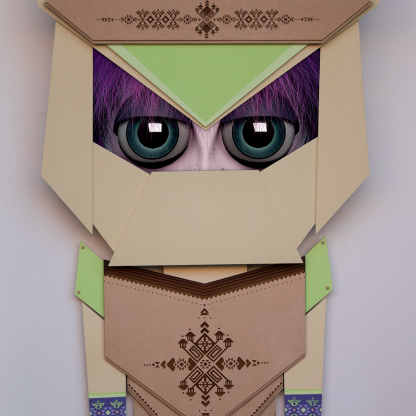 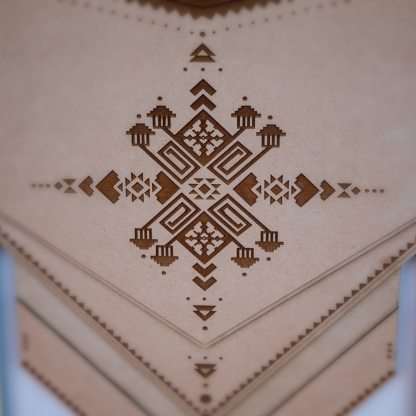 Carlos creates what he calls an immersive reality installations, conflating art and technology. His sculptures are combinations of architectural precision, artistic innovation, and craftsmanship. To enhance our experience, some include sound in addition to a digital element, either an embedded video screen or a mapped projection. The artist uses animation to imbue his characters with movement and emotions. Carlos learned fabrication on his own by trial and error. He works tirelessly perfecting his artistry. Laser cutting and 3D printing are among his many techniques.

“My biggest question is What is our reality? Is it created by us, all that we see? Do we build our existence and live out all what we had perceived as truth? I’ve been fascinated with the concepts of reality, perception and consciousness. I think my art reflects, a lot, the spiritual trans, when you get to the point where you are at peace, no thoughts, nothing, you just feel it. That’s where I try to get with my art… kind of hypnotizing you.” Carlos tries to ignite our curiosity to examine our perception of reality by inviting us to relax and employ our senses not just to collect data about our environment, but to enter a meditative state and to tap into the unlimited knowledge available to us through what he calls “the connected universal language.” 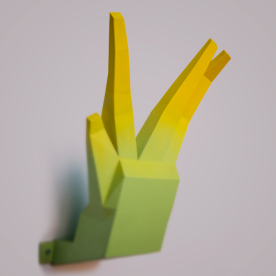 Once you step into his immersive engrossing playground-like installation, it’s possible to be let into a trancelike state by psychedelic colors, pulsing eyes, rotating orbits and flashing lights. At a glance, these look simplistic, even toy-like, and our discerning minds, used to tackling world’s problems and constantly being challenged by conceptualism in contemporary art, move fast to dismiss them as too primitive. That is what Plato warned us about – not to dismiss the philosopher who challenges our perceptions. It is a lofty goal and for this artist it comes from his own insatiable appetite for knowledge. His own challenge is that thinking and questioning always lead not only to answers but to more questions.

Carlos was born in the United States, but grew up in Ciudad Juárez, Mexico, where his life was marked by the excitement of being involved in the developing underground rave scene. From there, Carlos moved to Guadalajara to attend a highly prestigious university in the field of design, Jesuit College (ITESO). To pay for college and as a favorite pastime, Carlos did illustrations. His many characters take inspiration in Mexican myth and rich folkloric imagery.

Also during this time, with two of his friends, Carlos designed and published a magazine. “At that time Internet was just starting to spread, and I thought how do I blend Internet with a magazine.” The development of the magazine took him about 2 years. It was a poster size, Carlos designed it so that as you were opening it, it unfolded as if you were scrolling down. “And at the end you had a prize, a big poster from a well-known designer who I invited for every edition. But 15 years ago, nobody wanted to change a format of the magazine; everyone wanted the usual. I pushed so hard that we published it in Vancouver, Berlin, Barcelona, and Mexico, in very little time.“ That was a difficult enterprise for someone with no experience, but it taught Carlos a tremendous amount of confidence and instilled him with belief in his abilities to overcome any challenge, which propelled him through hard times of moving to the U.S.

Guadalajara also left an indelible imprint. “Mexico is a very folkloric and colorful country, and very surreal too. I think that’s what influenced me: the color, the brightness, the patterns, the mythologies. All that stuff are in me. In the border [Ciudad Juárez] we have  a double culture, not really Mexican, not really American. When I moved to the middle of Mexico, to Guadalajara, I started learning more about the roots of Mexico and started falling in love with the culture more than ever.” One of his biggest artistic influences is Luis Barragán, Mexican architect who designed magically poetic spaces by using bright colors.

After graduation, Carlos, who was married by then and the couple was expecting their first child, decided to go to Los Angeles to look for opportunities to provide for his new family. He moved with $2,000 to his name and no family or friends to make it easier for him. But his drive, passion, curiosity, hard work and love for his family helped him through and even got him to the point now, where he is able to devote time and money, little by little, to establishing his full-time artistic practice. His current studio is tiny and also serves

as storage for completed works, but this does not discourage the artist, who spends many afterwork hours in the studio. His plan is to have a large studio within a year. “At home I have large unfinished sculptures. I have one, which my wife wants me to throw away. The head of it is huge, just the head! It requires 6 projectors, because it’s 360 [degrees], so all the projectors, everything moves on the character. But I cannot have it in my studio either because it is tiny. At least I have to take what I have now and exhibit somehow in order to get it out and build other stuff. I have 14 pieces trying to get out. “

It is a pivotal time in the artist’s life and career. We met a few months ago, and I am smitten by this passionate hard-working dreamer and philosopher. As I watch how fast he moves forward, how persistent and driven he is, and how much creative potential is within him waiting to be unlocked given time and resources, I feel that this artist should be on everybody’s radar. 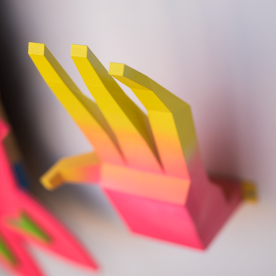 MINTAKA “I Came in Peace” / closer look at the artwork: VIDEO

To learn more and connect with the artist:
www.mgoglktko.com
www.instagram.com/mgoglktko

Passionate about people with passions, I write about artists, their lives and artistic journeys; sometimes, I post my musings on exhibitions that speak to me. I don't believe in critiquing, but I believe in connecting. Knowing someone better hopefully leads to understanding, which also gives rise to a connection (intellectual, emotional or spiritual). People, who establish such a link with an artist, are more likely to want to live with their art. And, not only, often buying an artwork is a gesture of support for the artists we like and encouragement to keep creating. To quote Swiss curator, artist and art historian Harald Szeemann, "If the personal relationship is taken out, the dimension of intimacy, then the museum and art business gradually starts to become annoying." View all posts by YABNYC